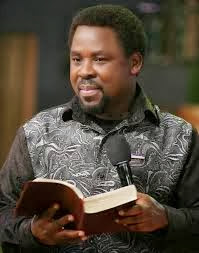 In the 27th October 2013's Sunday service in the Church he leads, SCOAN, in Lagos, Nigeria, Prophet T. B. Joshua said from wednesday to thursday he saw a leader being captured and insisted that people should pray for the leader.

He clarified that the country he prophesied about is not Kenya and desribed that county saying "the same country it happened to in the past, when they were drinking and dancing........country close to the Kenya". Furthermore, he warned "if prayer and security is not being, the blood of thousand people will be wasted". Moreover, The Prophet said that he neither know what happens to the leader after being captured, who captured him nor the reason for capture. He added that he will not mention the name of that leader that God told him, because people will start abusing him (the leader), and promised to mention as long as people start praying for him.

The Prophet warned people not to neglect the message and instead take the spiritual measures. He reminded people about the prophecy to the President of Argentina he uttered last year when he said “I see death of an Argentina leader but he/she can be saved if there is no operation. He may go into a comma but will come back to life later,” The same message was then translated into French and Spanish and sent to Argentina. Regardless the precaution from Man of God, the President still underwent surgery to remove blood from the surface of her brain this month and she is now weak, hence unable to resume public duties.The Prophet added that he is so worried that what he is looking at is like no other person sees what he's looking at. If there would be another person somewhere who sees what he sees, he would feel more comfortable for he (another person) will confirm what he sees.

He urged people to pray and himself is praying for that country so that the capture will not take place and when such capture happens the evils will be minimized to the zero level.