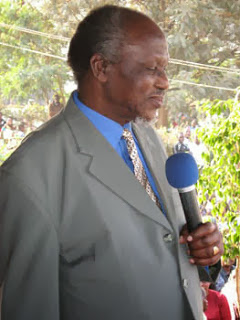 Moses Kulola, born in June 1928, in a family of ten children and five are still alive, registered for my first school in 1939 called Ligsha Sukuma a mission school and after Ligsha, I enrolled for the institute of Archtchture in 1949. I was baptised in 1950 in the AIM Church Makongoro.

Married to Elizabeth with 10 offsprings where seven are still alive.Begun missionary work in 1950 eventhough i was called upon in 1949 just after my baptism.

In 1959 i was enrolled on government work which i did to preach the gospel in towns and villages being a government employee. My great service to my country came to an end in 1962, where i compeletely dedicated my power, body and soul. In 1964 i enrolled in the theological college and 1966 i qualified with a diploma.

I didnt just stop there with education as i continued with correspondenced studies which accredited to my so many certificates accross the world.

ServiceI worked for two years as Pastor before becoming a Pentacostal believer that is 1961 to 1962, worked in TACR church 1966 till 1991 where i begun decided to started the Evangelistic assemblies of God.EAGT has succeded to growth at a great pace in Tanzania, Zambia, Malawi and tantamounting to a total of not less than 4000 churches in a range of big and small and I Moses Kulola being the bishop of the four thousand churches, Assistant Bishop Mwaisabila.

Running four thousand churches has never been a simple that is why the division has been done of about 34 provinces of operation and five zones for simplifying work and every county and Zone has its own Overseer.